Hue is a city in central Vietnam that was the seat of Nguyen Dynasty emperors and the national capital from 1802 to 1945. A major attraction is its vast, 19th-century Citadel, surrounded by a moat and thick stone walls. It encompasses the Imperial City, with palaces and shrines; the Forbidden Purple City, once the emperor’s home; and a replica of the Royal Theater.

Dragon boats ply the Sông Hương River, dubbed the Perfume River for the fragrant flowers that drop into it from nearby orchards each fall. To the south lie 7 imperial tombs, including the Tomb of Tu Duc, with a lotus-filled lake and pavilion. Another significant site, Thien Mu Pagoda, dates to 1601 and contains a monastic complex and 12 wooden sculptures of the temple’s fearsome guardians. Other diversions include bustling Dong Ba Market and eateries serving local dishes such as bun bo, a spicy beef noodle soup. Day trips include picturesque Thuận An Beach and tours to the Demilitarized Zone 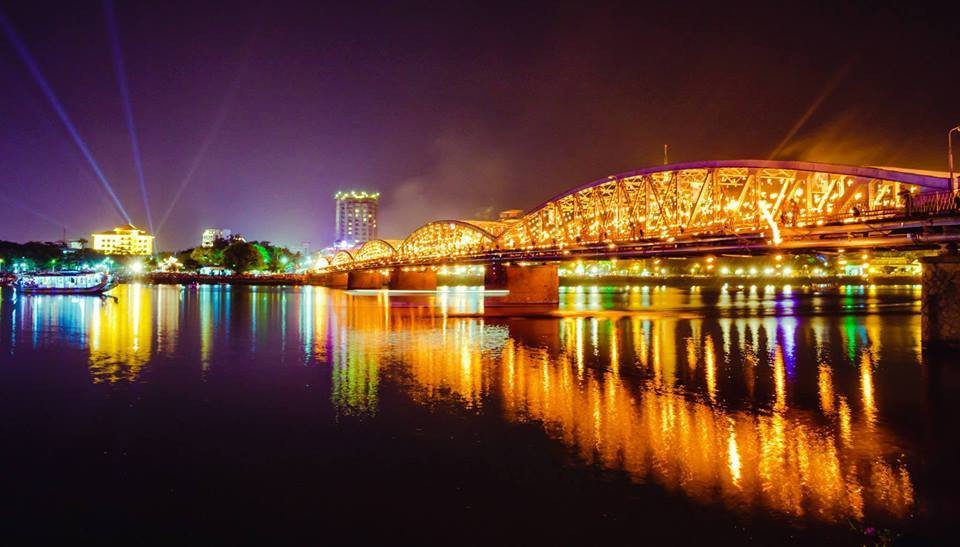 Hue’s weather is infamously bad: the Truong Son Mountains just to the south seem to bottle up all the moisture, so it’s usually misty, drizzly or outright rainy. Things get even wetter than usual in the winter rainy season, especially from February to the end of March. To be safe, bring along an umbrella any time of year. Don’t forget to bring a sweater and jacket in winter as it can get rather chilly, with temperatures falling to as low as 8 degrees at night. Alternatively, when the sun makes an appearance for a day or a week, it can reach 30 degrees.

It’s usually quite dry during the summer months, when the temperature can reach the high 30’s. Summer rains can be heavy but brief, and often arrive unexpectedly, whereas February rains can last for weeks. The best description for the weather in Hue would be “changeable”.

The former imperial seat of government and Hue’s prime attraction, this is a great sprawling complex of temples, pavilions, moats, walls, gates, shops, museums and galleries, featuring art and costumes from various periods of Vietnamese history. Thanks to its size, it is also delightfully peaceful – a rare commodity in Vietnam. It is pretty huge; plan to spend at least 3 hours there.

Tombs of the Emperors

The other great attractions in Hue are the Tombs of the Emperors, which are located along the Perfume River south of the city. They are accessible by taxi or bike from the city, but the best way to see them is to hire a river boat and go for a cruise. Plan to make a full day of it, although if you rent a car, it will take only a few hours to see those worth seeing. 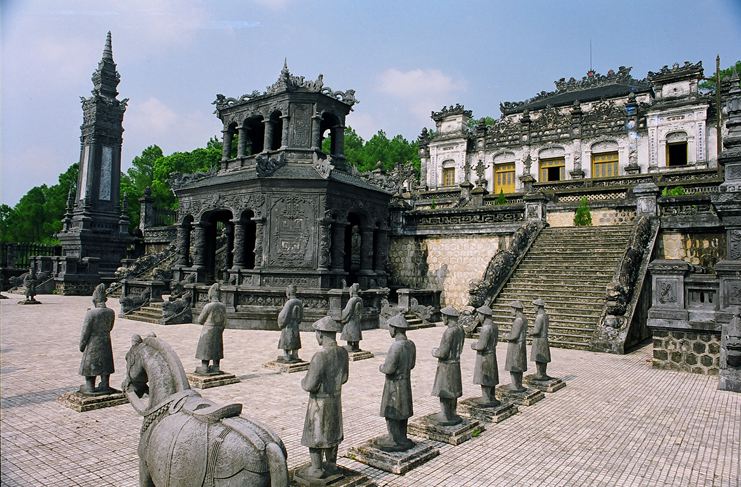 The tombs themselves are worth the cost and effort. They mostly date from the late 19th or early 20th centuries, when the Emperors had been reduced to figureheads under French colonial rule and had little else to do than build themselves elaborate tombs. The finest of them are the Tomb of Tu Duc, the Tomb of Minh Mang and the Tomb of Khai Dinh, all of which are excellent examples of Vietnamese Buddhist aesthetics and architecture. The older ones have been allowed to crumble into picturesque semi-ruin, although some are now being restored.

Thien Mu Pagoda (4km) – perched on a bluff over the river and housing some very fine gold and silver Buddha images. The Thien Mu Pagoda overlooks the Perfume River and is the official symbol of the city of Hue. Thien Mu means “elderly celestial woman”, and refers to an old legend about the founding of the pagoda. Brimming with opportunities for great photos.

Phu Bai Airport is a must-see if you are interested in the war. The airport was a dirt strip during the Indochina War. Then, during the Vietnam War, an American garrison was assigned there and built up the airport with concrete bunkers, a paved airstrip, and a few other luxuries. The airport was vital in keeping Hue supplied during the Eastertide Offensive of 1972 when “Charlie jumped the line”. The airport retains the original buildings built by the Americans; however, they have been retrofitted for use by the Vietnamese.

Thanh Toan Bridge – a few kms out of the city is this beautiful wooden footbridge. It is a great place to observe rural life, and is often full of locals escaping the sun. While it might not be worth the trip on its own, it’s definitely worth a stop if you are in the area.