Vietnam’s recorded history stretches back to the mid-to-late 3rd century BCE, when Âu Lạc and Nanyue (Nam Việt in Vietnamese) were established (Nanyue conquered Âu Lạc in 179 BCE). Pre-historic Vietnam was home to some of the world’s earliest civilizations and societies—making them one of the world’s first people who practiced agriculture and rice cultivation. The Red River valley formed a natural geographic and economic unit, bounded to the north and west by mountains and jungles, to the east by the sea and to the south by the Red River Delta. According to myth the first Vietnamese state was founded in 2879 BC,but archaeological studies suggest development towards chiefdoms during the late Bronze Age Đông Sơn culture. 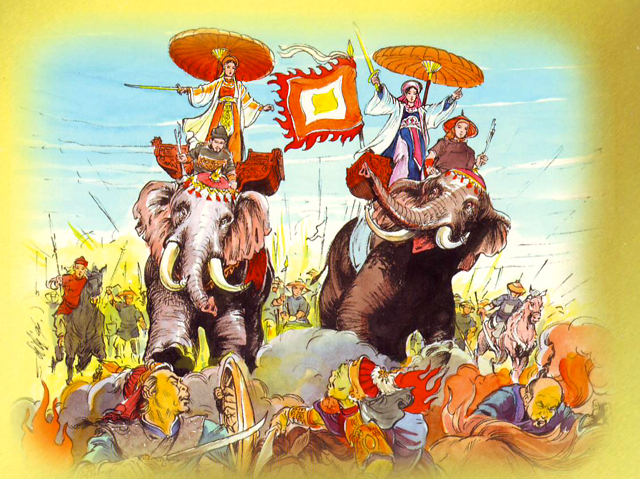 Vietnam’s peculiar geography made it a difficult country to attack, which is why Vietnam under the Hùng kings was for so long an independent and self-contained state. Once Vietnam did succumb to foreign rule, however, it proved unable to escape from it, and for 1,100 years, Vietnam had been successively governed by a series of Chinese dynasties: the Han, Eastern Wu, Jin, Liu Song, Southern Qi, Liang, Sui, Tang, and Southern Han; leading to the loss of native cultural heritage, language, and much of national identity. At certain periods during these 1,100 years, Vietnam was independently governed under the Triệus, Trưng Sisters, Early Lýs, Khúcs and Dương Đình Nghệ—although their triumphs and reigns were temporary.

During the Chinese domination of North Vietnam, several civilizations flourished in what is today central and south Vietnam, particularly the Funanese and Cham. The founders and rulers of these governments, however, were not native to Vietnam. From the 10th century onwards, the Vietnamese, emerging in their heartland of the Red River Delta, began to conquer these civilizations.

The Ming Empire conquered the Red River valley for a while before native Vietnamese regained control and the French Empirereduced Vietnam to a French dependency for nearly a century, followed by an occupation by the Japanese Empire. Political upheaval and Communist insurrection put an end to the monarchy after World War II, and the country was proclaimed a republic.
Go to topasiatravel.net for more useful information about Vietnam tours with Top Asia Travel