In Vietnam, the climate is tropical in the north and subtropical in the center and south, and it’s influenced by the monsoons: the south-west monsoon affects the country from May to October, and the northeast monsoon from October to April. The former brings heavy rainfall in the exposed areas, ie both the north and the south, while along the central part, protected by the mountains, it brings relatively little rain and leaves often space to the sun. The north-east monsoon is generally drier, but it brings heavy rains in the early months (October-December) along the coast exposed to the east, and light but frequent rains in the north.
In inland areas, there are hills and mountains, which make the climate milder in the summer months, but even cold in winter in the north.
The amount of rainfall is normally between 1,500 and 2,500 millimeters (60 and 98 inches) per year, but there’s also a relatively small arid zone in the Phan Thiet area (north-east of Ho Chi Minh City), where it’s slightly above 1,000 mm (40 in).

In the north of Vietnam, the climate in winter is unusually cool for the latitude: we are just south of the Tropic of Cancer, yet the average temperature in January is below 20 °C (68 °F): in Hanoi, the average is 17.5 °C (63.5 °F), in Vinh, it’s 19 °C (64 °F), while it’s around 14 °C (57 °F) in the northernmost areas of Tonkin, where the temperature at night can approach freezing (0 °C or 32 °F) between December and February (and sometimes in early March).
Here are the average temperatures of Cao Bang, located in the north-east, a short distance from the border with China. 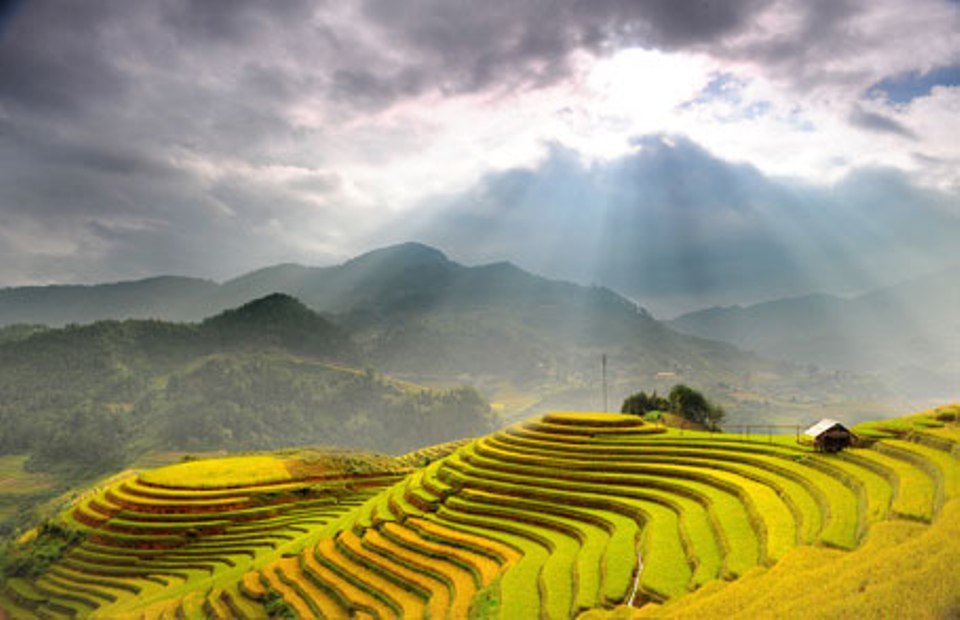 Along the coast of central Vietnam, the winter is warmer: the average temperature in January ranges from 20 °C (68 °F) in Hue to 24 °C (75 °F) in Nha Trang. In addition, in the central part, the summer monsoon produces little effects, so that less than 100 mm (4 in) of rain fall per month until August, and the amount of sunshine remains acceptable. Here, the rainy season comes later, and runs from September to December, but even to January in the northern part (from Ha Tinh to Da Nang), with a maximum in October and November, when the rains can be torrential. These intense rains at the end of the year are due to the retreating monsoon, which particularly affects the part of the coast exposed to the north-east: in Hue, 500 mm (20 in) of rain fall in September, 900 mm (35 in) in October, 680 mm (26.5 in) in November, 350 mm (14 in) in December, and still 145 mm (5.5 in) in January.

In the interior of central Vietnam, due to the presence of mountains the climate is milder, in fact, there are many cities located between 400 and 1,000 meters (1,300 and 3,300 feet) above sea level, where winters are nice and sunny, while summers are a bit less sultry than at sea level.

In the southern part of the country and on the southern islands (see Con Dao, Phu Quoc), the climate is hot all year round, while the rainy period is the summer, as happens in the north. Between November and mid-February, the maximum temperatures are around 30/32 °C (86/90 °F), while by mid-February, the temperatures starts to rise, and reach the highest level of the year between March and May: 33/35 °C (91/95 °F) on average, but with peaks of 40 °C (104 °F), before the arrival of the monsoon. During the period of the summer monsoon, the heat is quite muggy.
Go to topasiatravel.net for more useful information about Vietnam tours with Top Asia Travel