Vietnam is a country of tropical lowlands, hills, and densely forested highlands, with level land covering no more than 20 percent of the area. The country is divided into the highlands and the Red River Delta in the north; and the Giai Truong Son (Central mountains, or the Chaîne Annamitique, sometimes referred to simply as the Chaine), the coastal lowlands, and the Mekong River Delta in the south.

The Red River Delta, a flat, triangular region of 3,000 square kilometers, is smaller but more intensely developed and more densely populated than the Mekong River Delta. Once an inlet of the Gulf of Tonkin, it has been filled in by the enormous alluvial deposits of the rivers, over a period of millennia, and it advances one hundred meters into the gulf annually. The ancestral home of the ethnic Vietnamese, the delta accounted for almost 70 percent of the agriculture and 80 percent of the industry of North Vietnam before 1975.

The Red River (Song Hong in Vietnamese), rising in China’s Yunnan Province, is about 1,200 kilometers long. Its two main tributaries, the Song Lo (also called the Lo River, the Riviere Claire, or the Clear River) and the Song Da (also called the Black River or Riviere Noire), contribute to its high water volume, which averages 500 million cubic meters per second, but may increase by more than 60 times at the peak of the rainy season. The entire delta region, backed by the steep rises of the forested highlands, is no more than three meters above sea level, and much of it is one meter or less. The area is subject to frequent flooding; at some places the high-water mark of floods is fourteen meters above the surrounding countryside. For centuries flood control has been an integral part of the delta’s culture and economy. An extensive system of dikes and canals has been built to contain the Red River and to irrigate the rich rice-growing delta. Modeled on that of China, this ancient system has sustained a highly concentrated population and has made double-cropping wet-rice cultivation possible throughout about half the region.

The highlands and mountain plateaus in the north and northwest are inhabited mainly by tribal minority groups. The Giai Truong Son originates in the Xizang (Tibet) and Yunnan regions of southwest China and forms Vietnam’s border with Laos and Cambodia. It terminates in the Mekong River Delta north of Ho Chi Minh City (formerly Saigon).

These central mountains, which have several high plateaus, are irregular in elevation and form. The northern section is narrow and very rugged; the country’s highest peak, Fan Si Pan, rises to 3,142 meters in the extreme northwest. The southern portion has numerous spurs that divide the narrow coastal strip into a series of compartments. For centuries these topographical features not only rendered north-south communication difficult but also formed an effective natural barrier for the containment of the people living in the Mekong basin.

Within the southern portion of Vietnam is a plateau known as the Central Highlands (Tay Nguyen), approximately 51,800 square kilometers of rugged mountain peaks, extensive forests, and rich soil. Comprising 5 relatively flat plateaus of basalt soil spread over the provinces of Dac Lac and Gia Lai-Kon Tom, the highlands accounts for 16 percent of the country’s arable land and 22 percent of its total forested land. Before 1975 North Vietnam had maintained that the Central Highlands and the Giai Truong Son were strategic areas of paramount importance, essential to the domination not only of South Vietnam but also of the southern part of Indochina. Since 1975 the highlands have provided an area in which to relocate people from the densely populated lowlands.

The narrow, flat coastal lowlands extend from south of the Red River Delta to the Mekong River basin. On the landward side, the Giai Truong Son rises precipitously above the coast, its spurs jutting into the sea at several places. Generally the coastal strip is fertile and rice is cultivated intensively.

The Mekong, which is 4,220 kilometers long, is one of the 12 great rivers of the world. From its source in the Xizang plateau, it flows through the Xizang and Yunnan regions of China, forms the boundary between Laos and Burma as well as between Laos and Thailand, divides into two branches–the Song Han Giang and Song Tien Giang–below Phnom Penh, and continues through Cambodia and the Mekong basin before draining into the South China Sea through nine mouths or cuu long (nine dragons). The river is heavily silted and is navigable by seagoing craft of shallow draft as far as Kompong Cham in Cambodia. A tributary entering the river at Phnom Penh drains the Tonle Sap, a shallow fresh- water lake that acts as a natural reservoir to stabilize the flow of water through the lower Mekong. When the river is in flood stage, its silted delta outlets are unable to carry off the high volume of water. Floodwaters back up into the Tonle Sap, causing the lake to inundate as much as 10,000 square kilometers. As the flood subsides, the flow of water reverses and proceeds from the lake to the sea. The effect is to reduce significantly the danger of devastating floods in the Mekong delta, where the river floods the surrounding fields each year to a level of one to two meters. 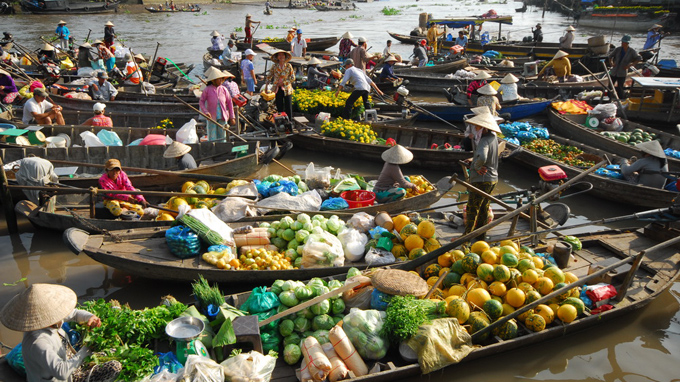 The Mekong delta, covering about 40,000 square kilometers, is a low-level plain not more than three meters above sea level at any point and criss-crossed by a maze of canals and rivers. So much sediment is carried by the Mekong’s various branches and tributaries that the delta advances sixty to eighty meters into the sea every year. An official Vietnamese source estimates the amount of sediment deposited annually to be about 1 billion cubic meters, or nearly 13 times the amount deposited by the Red River. About 10,000 square kilometers of the delta are under rice cultivation, making the area one of the major rice-growing regions of the world. The southern tip, known as the Ca Mau Peninsula (Mui Bai Bung), is covered by dense jungle and mangrove swamps.

Vietnam has a tropical monsoon climate, with humidity averaging 84 percent throughout the year. However, because of differences in latitude and the marked variety of topographical relief, the climate tends to vary considerably from place to place. During the winter or dry season, extending roughly from November to April, the monsoon winds usually blow from the northeast along the China coast and across the Gulf of Tonkin, picking up considerable moisture; consequently the winter season in most parts of the country is dry only by comparison with the rainy or summer season. During the southwesterly summer monsoon, occurring from May to October, the heated air of the Gobi Desert rises, far to the north, inducing moist air to flow inland from the sea and deposit heavy rainfall.

Annual rainfall is substantial in all regions and torrential in some, ranging from 120 centimeters to 300 centimeters. Nearly 90 percent of the precipitation occurs during the summer. The average annual temperature is generally higher in the plains than in the mountains and plateaus. Temperatures range from a low of 5°C in December and January, the coolest months, to more than 37°C in April, the hottest month. Seasonal divisions are more clearly marked in the northern half than in the southern half of the country, where, except in some of the highlands, seasonal temperatures vary only a few degrees, usually in the 21°C-28°C range.