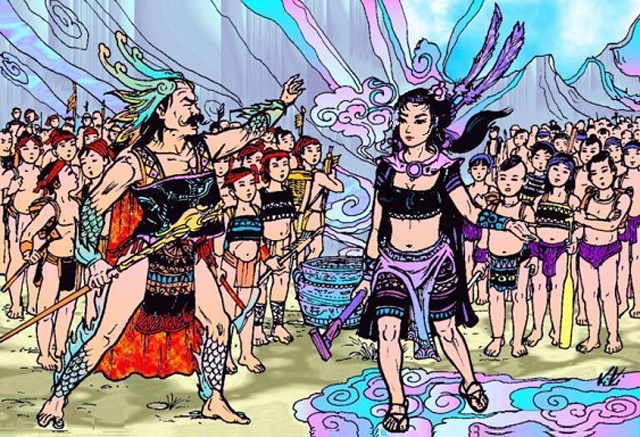 The reality, unsurprisingly, is rather less poetic. The population of Vietnam is an eclectic mix of cultures, languages and religions, encompassing at least 54 ethnic groups. The majority of the country, however, is dominated linguistically and culturally by the ethnic Vietnamese – also known as the Viet, or Kinh – who make up nearly 90% of the population and are thought to have originated in an area now occupied by southern China and northern Vietnam.

The only areas in which ethnic Vietnamese do not form the majority are the far northern regions of the country, where a diverse collection of ethnic groups maintain lifestyles and cultures quite different from the mainstream. These minority groups can often be recognised by their distinctive traditional dress and unique local customs. The largest of these groups are the Tay, Tai, Muong, Khmer Krom, Hoa, Nung and Hmong.

As an eclectic fusion of monotonic Mon-Khmer, with Thai tonality and grammar and liberal borrowings from Chinese, the Vietnamese language reflects the diverse origins of the people who speak it.

Though an original writing system for the Vietnamese language was employed in the thirteenth century using modified Chinese characters, it wasn’t until the mid-1600s that the current Vietnamese alphabet (quoc ngu) was developed. This writing system, which uses the Latin alphabet with a wide range of diacritic marks to indicate additional sounds and tone, was developed by Portuguese Catholic missionaries with the express purpose of aiding their missionary efforts. The popularity of the script spread with help from the French, and eventually the traditional, Chinese-based Vietnamese script was abolished in 1918.